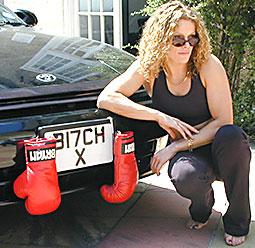 Sportsmen and women love their number plates, and boxers are no exception. Chris Eubank is often spotted in London or Brighton in his black Hummer with the number 1 KO, and up until recently ‘Prince’ Naseem Hamed was a regular feature in Sheffield with 1 NAS and NAS 1. But when we think of boxers, why do we immediately think of men? One woman who is constantly breaking the mould in this feisty sport is the 5’1” Women’s European Flyweight Boxing Champion, Cathy Brown.
After a successful seven years in kickboxing, Cathy made the switch to boxing in 1999 when she was approached by The World Sports Organisation. Just two months later, she made her pro boxing debut, defeating former WIBF world title holder Veerle Braspenningx of Belgium. ‘The Bitch’ was officially born.
Always a pioneer in women’s boxing, Cathy says that although the last few years have been an uphill struggle, it makes her ever more determined to succeed. “Unfortunately the number of professional women boxers has gone down from 5 to 3 since 2001. It is simply because there is no back-up for women in this sport and England has proven to be a very sexist nation.”

In America, Laila Ali (daughter of boxing legend Mohammed Ali) made her boxing debut in New York on 8 October 1999, just two months after Cathy. It was thought by many that it would give women’s boxing across the world a much needed boost to have such a big name in the ring. Laila has indeed followed in her father’s footsteps, becoming very successful, but it hasn’t affected opinions about women’s boxing in Britain. “UK boxing promoters are still not convinced that spectators and TV viewers will be interested in watching two women fight,” says Cathy.
Despite this gloomy outlook, Cathy’s own boxing career continues to flourish alongside her freelance Personal Training business. She teaches kickboxing to women and to girls with special needs aged 10 -16, as well as boxing to mixed classes of men and women. Some of her clients include celebrities, such as Sara Cox and Alexander McQueen. On top of all of this, she somehow fits in her own intensive training schedule! 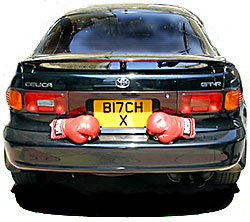 Keen to promote her sporting name, Cathy thought from the very beginning that a good way of doing this was with a personal number plate. When she was offered B17 CHX, she was delighted. “The plate is on my red Hyundai Coupe at the moment. It looks great! When people see my number, they know it’s me driving past – it’s excellent for self-promotion.”
Always looking to broaden her horizons, Cathy is looking to clinch more TV work. She has appeared on several shows over the years but in November 2005, she was the subject of a BBC documentary ‘The Challenge’ in which she had to learn to sail in just five months before embarking on a challenging race across the Atlantic Ocean in a yacht. The programme focused on her physical and mental journey through the gruelling training and subsequent attempt at the transatlantic speed record. Cathy has also appeared in the BBC 2 programme with Sir David Frost, Through the Keyhole, where a panel of celebrities guess who owns the house shown to them, from a set of clues.
“My main goal for this year is to present an Extreme Sports show on TV. My agent is working on that for me right now.”
Cathy’s latest boxing appearance was in a European Boxing Union (EBU) title fight at Hammersmith Palace on February 25, 2006.