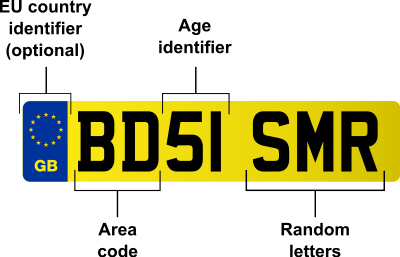 British number plates have been part of our automotive heritage since the turn of the century. The number plate has evolved over the last 110 years to it’s current format and predates even the Driver and Vehicle Licensing Agency, DVLA. When the vehicle registration numbers were first displayed on number plates the front and back plates were black with white letting.

The number plates on our vehicles have gone through many changes since the original black and white plates. As road safety and modern technology enhancements have developed the number plates have advanced to it’s current guise.
Number Plates Poll In Brussels

We have managed to develop our number plates for over 100 years with out the help or dictate from outsiders. Until now that is, The European Parliament is considering plans to standardise a European design for number plates complete with identifying tags, across the continent. The design would likely make it compulsery to display the European Badge. The British Conservative MEP Syed Kamall has said the plans were “idiotic.”

These proposals, the work of a Dutch MEP, are supposed to be aimed at making it easier to travel through other European countries and protect against fraud. This if successful could give way to a European index of vehicle registration numbers.

The laws surrounding our British number plates are already very rigid. The colours of the background and characters, Font, Character size and spacing are already dictaed by Legislation. We can currently have the GB Euro stars or Regional Badges if we so desire.www.Premier-Number-Plate.co.uk – 0208 144 1715