A football fan is set to cash in on United’s historic season – with a car registration plate celebrating the Reds’ record-breaking success. 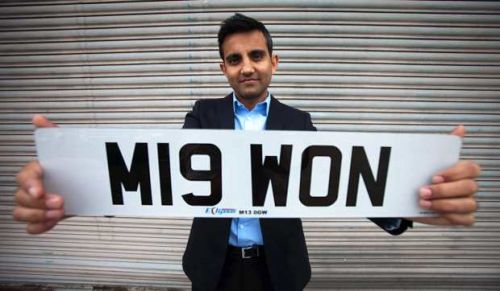 He’s already turned down an offer of £5,000. Bilal himself doesn’t want the plate – he’s a Liverpool fan.

The Reds’ latest title saw them surpass their Merseyside rivals to hold the record number of top-flight league crowns.

But canny Bilal, an accounts manager from Levenshulme, Manchester, said his investment was a simple case of forward-thinking. He said: “I thought of the idea about buying plate when I was watching a United match on television in March.

“I did a bit of digging and researching and just took a punt on it. Now it is a sound investment and a piece of history.

“It would be a great memento. It would look great on a fan’s car or a car belonging to one of the players. It is a great, portable piece of Manchester United’s history.”

Bilal now plans to put the registration plate up for sale on eBay.

He said: “It is hard to put a price on it because its worth whatever someone is willing to pay for it.

“My mates are all United fans and being a Liverpool fan, I have had lots of stick over the years. It’s just not something I could have on my car.”