A NUMBER of people made the most of a crime prevention day outside Repco on Wednesday.

Local Police were on hand to answer questions about vehicle safety and hand out anti-theft screws donated by Repco.

Sergeant Dave Law, who was one of the officers taking part in the program, said Police were able to re-attach 50 number plates using up all 50 packs of anti-theft number plate screws donated.

Sergeant Cockram said number plate theft is not a huge issue in Cootamundra, however is a growing concern for Police in Young and more recently Tumut.

The same numberplate program was run in both of these towns in addition to Cootamundra.

Over the past 12 months, three number plates have been stolen in Cootamundra and one on Jugiong, illegal compared to 10 number plates thefts in Young and eight in Tumut.

Sergeant Cockram said the stolen number plates are generally used to disguise other crimes including everything from people not paying for petrol at the service station to people committing serious robberies.

Sometimes people just want to souvenir the plates, particularly if they are unique in some way, according to Sergeant Cockram.

He said people were particularly receptive to the program which is part of an ongoing series of crime prevention workshops.

Initially the day was going to be run by registration Local Area Command crime prevention officer Peter Guthrie, however he was called to Wagga on Wednesday. 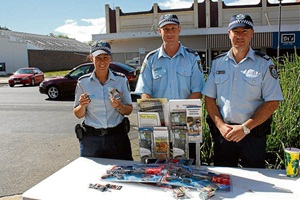