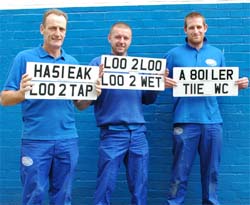 The Pimlico Plumbers of London are almost more famous for their wonderful collection of number plates than the vital 24 hour service they provide.

Their collection of over fifty numbers began a few years ago when Managing Director Charlie Mullins first saw DRA 1N for sale. He thought it would look good on one of the company vans, so he bought it thinking it would be the only one he’d buy. “I couldn’t see the potential when I first had DRA 1N, but as soon as I realised the interest it created, I started to buy more plates. We have had so much publicity from them, it really is quite incredible. I honestly don’t think there is a better form of advertising. We really cannot quantify the interest in them. We’re mentioned on the radio at least once a month and Radio stations often base competitions around the plates, ‘spot the plumbers plate’ for example. We are more than happy to donate cash prizes.”
Plumbing Private Number Plates

The vast collection includes, B1 DET, GAS 9, T1 LER, 8 WC, RAD 5 and 51 NKS. Charlie says he’s noticed that other companies are copying their plate success, with one even rushing out to buy £30,000 worth of plates for their own fleet of vans. “They are such a talking point among our customers too. People ring up and ask for an engineer by their number plate – ‘BOG 1’ or ‘W4 TER’ for instance. Our engineers love them too. They ask me if they can have a plate for their van or use a specific van, with ‘LAV 1’ or whatever plate is their favourite. It is a real moral booster for them.”

Tony Walker has worked for the company for many years and says that after Charlie bought DRA 1N, he asked if he could have a plate for his van. “When the ‘X’ plates came out I found X1 EAK. I asked Charlie if I could have it. He agreed and after that the collection started to grow. When we speak to customers, they don’t ask what’s your name, they ask what your number plate is. Some customers even want a different number plate every time we go out to them!” Tony has his own collection of number plates at home, including X7 ONY. At work he has the prestigious W4 TER on his van. “Some people think that this is the best plate, but it’s not as amusing as BOG 1.”

Another engineer, Sam, has the privilege of having that one on his van. “I find that I’m constantly waving at people who are waving at me! I often find notes on my windscreen from cab drivers, saying what a brilliant plate they think it is. I’m known by everyone as the BOG 1 man.”

Pimlico’s most recent purchases are F1 USH and C15 TEN, but Charlie says, it won’t stop there. Pimlico Plumbers have over 100 vans in their fleet. “The aim is to have a plate on each one eventually. We even have a company policy to have a plate on every new van.”

“Yes they’re a great investment, but to us they really are priceless.”